Between my husband, myself and my family, we celebrate pretty much every major holiday. This means lots of traditions shared and a great deal of feasting! Easter and Passover are just around the corner but this week I hosted a small gathering in honour of the Jewish holiday, Purim.

Acknowledging Purim entails listening to the story of the holiday, giving to charity, sending gifts of food and having a big feast that usually includes Hamantaschen (triangular shaped cookies filled with one of many fillings). Some even dress up in costume, traditionally as the heroes of the Purim story.

Stories, helping others in need, baking for friends, eating cookies, AND an excuse to top my pajamas off with a Queen Esther crown? This is my kind of holiday!

This was my first attempt ever at making Hamantaschen from scratch and was a delectable failure! All of the elements were spot on but the triangular cookies I carefully placed in the oven opened up during baking. Sad face.

The moral of this baking story? Don’t worry too much about messing up or making mistakes. Have fun, use yummy ingredients and you might end up with a perfect dessert or a perfectly delicious mess! 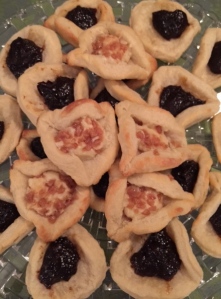 Here is the simple recipe I like to use for Hamantaschen dough, it is not overly sweet and balances perfectly with whatever decadent filling you choose. I used a simple and traditional prune filling for some and a new-school toffee cheesecake filling for others (recipe down below).

Hamantaschen Cookie Dough:
Beat the butter and cream cheese together until light and creamy. Slowly add the flour and sugar until fully combined. Finally, form the dough into a ball, wrap tightly and chill overnight.

Let the dough ball rest at room temperature for 30 minutes and then roll it out to approximately 1/4″ thickness. Using a 3″ round cutter, or in my case the top of a drinking glass, cut out circles.

As is the case with any rolled cookie, remove the surrounding scraps of dough to be re-rolled for more cookies.

Place a small dollop of filling in the centre of each cut circle.

Next, fold one edge of the circle inward to begin making a triangle. As you fold each third pinch the corners together with a drop of water to ensure a tight seal. This may be where I seriously dropped the ball!

In any case, I served them up with a sense of humour and a pot of coffee and they were ALL gobbled up by the end of the night. Turns out looks aren’t everything! 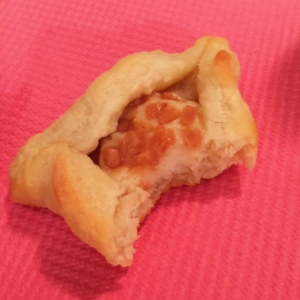 The cream cheese filling was an experiment and a total hit. It can be piped into cupcakes, stuffed into cookies or scooped up on a graham cracker. It’s like cheesecake’s answer to Nutella.

Beat the cream cheese, sugar and vanilla together until the mixture looks well combined and irresistibly smooth. Stir in as many toffee bits as you like.